What do we mean by public spaces?

The public spaces give the idea of something free, that you can access without paying
Free also in the sense that it doesn’t have enclosures
The public spaces are spaces opened for the whole citizenship
Spaces for well-being
Everything that is outside of my door is a public space
A space that is accessible and usable to everybody, even for persons with disabilities
A space opened to differences, to persons with different cultural backgrounds and from different countries
A space that can be created and transformed by the citizenship.
Spaces without limits, that can be built and shared together with the children.
It is a point of reference, a space for rituals
It’s a space that can be lived and experienced by more persons, starting from the small children, but also the whole citizenship, a place that can become a meeting point between different generations
Spaces of social cohesiveness
Places for sharing and listening, where different voices create the political and social sense of the community.

Which public spaces would you want to use with children? 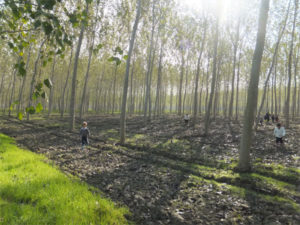 (the Golena near Po river in Brescello)

Observe the children, their interests, in their explorations and giving them the photo cameras to see what is their point of view.
To change point of view, with binoculars, periscopes, magnifying glasses, in order to offer tools that permits them to make different observations.
Do it in a small group because in the big group maybe we lose some of the groups interests.
Live these places during different moments of nature’s cycles.
Even with the youngest children we can start from their interest, because that is the engine of the research.
Open spaces invite to explore with the body.
It’s important to explore the same places more times, because each time you visit a place you find new elements.
When we told the parents that the children had used the photo camera they were stunned. It’s a way to recognize the children abilities to experiment and use different tools. All of these explorations sustain the children’s autonomy.
Here there is a summary of the three focus group discussions.
Within this horizon we can find our idea of child, the idea of a competent child, that “is capable of”, with lots of possibilities and potentialities that continues to surprise us.
Offer them the opportunity to experience unusual places, like places of the territory, that identifies that particular territory.
For us it has been great to re-discover how the body is important in the experiences and the learning processes. Because just going out and perceiving the temperature is an opportunity for learning. (i.e.: staying in the fog gives different perceptions…). Outdoor there are many sensibilities that you usually don’t explore, there are different sounds, perfumes, and other perceptions. The outdoor spaces sustains the imagination.
Through the body the children develops their autonomy and self-esteem: “I can, I’m able too!”. It’s a free way of tutoring.
It’s important to leave traces on the territory.
The families become aware of how the children doesn’t need things that are already structured, already perfect or prefabricated, to move their fantasy.
The children become like mediators with the families to help them to understand this. It’s the children that teach the parents the way that they can use these spaces.
So, offering possibilities to make experiences and then sharing with the parents, makes sure that it becomes more democratic.
And it becomes even more democratic if It’s not only spaces experienced by the children from our schools but by the whole community. If you inhabit and experience a place, then you take care of it more. 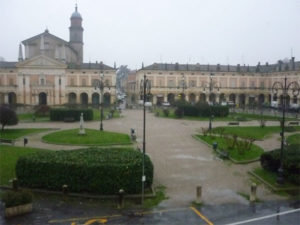 We can go outdoor with the children to make a project where they explore the spaces and the imagine how we could transform them, if there are things that we could add or change, ask them how they would like to live those spaces.
When I think about a square I dont think only about children, before it was a place where you met everybody and everything, it was a place that was characterized by the different seasons.
I have this feeling; the parents wouldn’t know what to do in the square today.
I think that as a school we have a great challenge to offer some alternatives to the parents, according to me some parents don’t know what to do in these places without games, without structured things, so maybe the preschool can show how these places can be inhabited and experienced, it’s a hard struggle, because sometimes it’s seems like we have forgotten fantasy.
Sometimes it’s enough to leave them in these places and give them the opportunity to discover them.
Many times we expect to stay in safety places. But the square also means stay in a disordered and andnot perfectly clean place.
According to me, if we begin to leave traces of the children, with the school and the involvement of families and grandparents, then maybe the citizens become curious. If we give an example maybe even other schools, with older children begin to use the public spaces. This might open up for a process where the citizens take care of the squares and use them in a democratic way. It’s in the square where all generations can meet, it’s the most excellent democratic space. According to me as a school we should begin from there, from staying in the square. We could also ask the families to share ideas of how we can use the square, for the wellbeing of their children.
Re-discover this spirit of gathering, beginning from the school, making sure that the parents can meet in the square. We could create a guide of the public spaces of the territory to put in the school. Where to we go? And proposals that we can realize.
So thinking of the square like a public space opened to everybody, a place that can be transformed. A place that can be used in different moments during the day, both by preschools and schools. 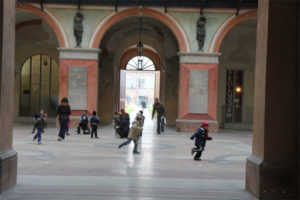 How could you democratically engage young children in these spaces?

I think it is important to ask the children what they would like to have in that place, what it is missing and how they would like to live it in a different way here. It is also important to have the opportunity to leave our marks/ traces inhabiting it with the children.
Probably using those places in other way, different from mental schemes or ideas of use we have. For example: the library or the theatre. We’ve asked three years old children how they want to use or live these places. The theater has become a gym, because they’ve found seats in a row so they were climbing up and down them, they made alternative paths and in the library they’ve decided it could be a place where you can make the music. We don’t know how but we think it is important to try to live it differently and not usually as we do as adults or stereotypically.
Children should be involved in these thoughts of use of places, we could also bring materials of our school into the library or other public spaces so that children could recognize experiences and themselves.
It is not easy to know what really children would like to have and to do in public spaces, expecially with young children of 1 or 2 years old. As our educational philosophy says we think that the first democratic action is listening…and listening young children it means to give time to them to express themselves and give time to us as adult to observe them without expecting anything. If we have the desire to have something that really involved children in a democratic way we have to consider that children of the infant toddler centre do not say what they want with their voice but with their behavior.
We can use the strategy of “little group” experiences because in this way we can dedicate more time of self-expression to everyone. It is also important to help children to understand that they are a group and that they can chose what they want to do only if they respect also other willing.
The use made of spaces constrains what really makes the majority ,there are times to do certain things and moments to prevent them.
And it is true that, if we consider democracy as freedom, the free use of spaces of children has in itself the risk of anarchy that maybe it does not coincides with our educational responsibility. How it is possible to keep together free expression of childhood and our responsibility? To give some limits it is also a protective need (especially in urban spaces that are dangerous, for example it is not possible to run in the middle of the road).
Freedom end when we or children are denying other freedom… but this is something that remain theory until we start to discuss about real experiences and to put ideas of all subjects together. 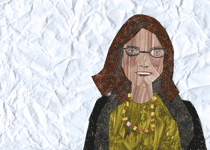 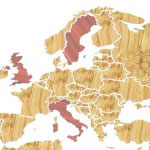